Experiences of a Dutchman living in Belo Horizonte, since December 2004, from month to month.
December 2006, part one: First encounter with Copacabana Beach, Rio de Janeiro.

Praia do Diabo, a short stretch of beach between
Copacabana and Ipanema

I fulfilled a long-cherished wish in the second week of December: a visit to the city of Rio de Janeiro. Little more than a year ago, I traveled with Claudia along the former capital of Brazil, when we traveled from Vila Velha and São Paulo, by bus. The highway is located at considerable distance from the city; therefore: I did not see anything of Rio during that travel. Jader, who had invited me to the unforgettable travel to Salvador some months earlier, called me and asked whether I was interested in a travel to Rio or not. I did not hesitate. We were about to depart from the campus on Thursday night, at 11 pm. There was a wild student party going on that night. Even the Brazilian friends considered this party as a wild party. It took some time before everyone (including myself, I have to admit) had quit the party and entered the bus. It was already 2 am, when the bus finally left the university campus.

Distances table, on the way to Rio.

The highway from Belo Horizonte to Rio de Janeiro is one of the better highways in this region. Part of this highway is duplicated: four lanes instead of two lanes. At the border of Minas Gerais with Rio de Janeiro, just after having passed Barbacena, the highway follows the slopes of a mountain range, and contains a large number of sharp turns. Hence, the bus ride to Rio de Janeiro, a distance of less than 450 kilometers, lasts at least six hours. The bus trip went well, despite the sometimes prolonged bus stops when fellow travelers wanted to have some more beers at the stop. We arrived at the ‘entrance’ of Brazil’s second-largest city at about nine. The bus now followed a wide avenue that was called ‘Linha Vermelha’, the Red Line. This Red Lane led to the famous districts of Botafogo and Flamengo.

Jader had arranged a cheap pousada (hostel) for us to stay. This pousada was located between the beaches of Copacabana and Ipanema. The bus was not able to stop there; we had to walk a few blocks with our luggage. The rooms contained two or three bunk beds and a shower. The first thing everyone did, besides unpacking the luggage, was taking a refreshing shower. We did not waste too much time, since we all were excited to visit the famous beaches of Copacabana and Ipanema. The beach of our first choice was Copacabana Beach. I joined two other travel companions, and also for them it was their first time in Rio. We followed Jader’s instructions – he knew Rio very well – and walked straight to the beach.

Even at this sunny and warm day, it was very quiet on Copacabana Beach. While this day was a holiday (Anniversary of the City) in Belo Horizonte, it was a normal working day in Rio. We stayed on the beach for a while; we enjoyed the sun, the lukewarm ocean water, and the magnificent views around us. Dozens hotels behind us, rocks in the water in front of us. And far behind, there was the famous Pão de Açucar (Sugar Loaf) Mountain. Our very first beach day in Rio was a big success. A few hours later, we decided to leave the beach, and get some more rest at the pousada. When I arrived at the entrance of the pousada, another small group asked me to join them, since I already had walked the route to the beach. I did not hesitate, since I did not really want to stay in the pousada during the day. I walked with them to Copacabana Beach. We did not stay on the beach, but we continued our walk along Fortress Copacabana, along the large shopping center, through the small but world famous park ‘Garota da Ipanema’. We arrived at Arpoador Beach, which is located next to the enchanted Ipanema Beach. Leblon Beach is located beyond Ipanema Beach. 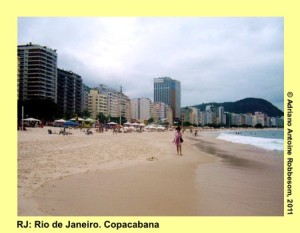 Hotels are located close to the beach.

(Click here for the complete coverage of ‘Rio de Janeiro’)
.

Destination Rio de Janeiro, the second travel to the former capital of Brazil.
Photographs made when entering the City of Rio de Janeiro via Linha Vermelha.

A small selection of photogaphs that I made during my second travel to Rio:

A small church on a prominent location. 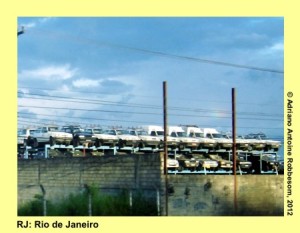 This picture is taken within one minute after the
previous one (above): a magic effect. 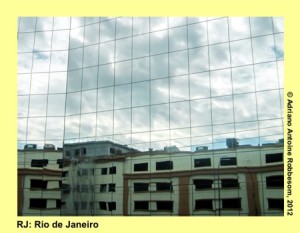 Destination Rio de Janeiro, the first travel to the former capital of Brazil.
After completing the Red Line to Botafogo and Flamengo, we observed red carpets in the district of Ipanema. 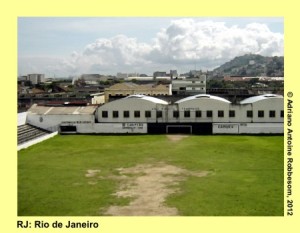 The bus was approaching the center of Rio, but we were still far from the center, and Ipanema lies far beyond. The bus driver could only drive at a low speed, thanks to the morning traffic.. We arrived in bairro São Cristovão, and passed a small stadium, with a very remarkable text: “Aqui nasceu o Fenômeno” (the ‘Phenomenon’ was born here). And there is only one Phenomenon that I know: Ronaldo Luis Nazario de Lima. Many Dutch football fans are not familiar with his official name, until you drop the abbreviated name, “Ronaldo. Then follows a joint “Aha!” Ronaldo, the footballer born in Rio de Janeiro, who had played for some years at PSV, and later showed his amazing skills during the World Cup in 2002. It was very interesting to me to notice the soccer field of his native neighborhood.

We passed a double deck highway, a kind of road I’ve only previously seen in Los Angeles. A creative yet a costly solution, constructing another highway, supported by countless pillars, on top of an existing road. We now drove along a hilly landscape, with steep, bare rocks which form the background of many sky scrapers. One of these rocks was propped by pillars, possibly to prevent further collapse of this part of the rock. Old historical buildings alternated with modern high-rise. In between small green areas, tiny parks. Statues of famous historic people stood petrified at their base. For me it was notable that many plants were grown on the balconies of apartment buildings. As if it were hanging gardens. We left the traffic jam behind us; the remaining kilometers were made much faster. We drove into the District of Ipanema…

Soon I got the impression that Ipanema should be a wealthy district. Expensive shops, well maintained buildings, the streets were even better than I experienced in Belo Horizonte. Shops with famous brands. Luxurious shopping arcades, shopping malls. As if I were in Los Angeles rather than in Rio. What a world of difference, after many kilometers driving along miserable buildings of favelas. Rio, a city of contrasts. Brazil, a country of contrasts. I noticed something red on the sidewalks. The red color of a carpet. Not an occasional carpet for a particular store, but a carpet, on the pavements! Were they mad, or was this a clever action to attract more customers? The carpets were embedded in the sidewalk by small nails. Probably they were already there for some days or even weeks, since they already had become dirty and faded. But that’s no wonder, with many walkers and cyclists using the red carpets. The red carpet seemed to be rolled out for us!

Destination Rio de Janeiro, the first travel to the former capital of Brazil.
Entering Rio de Janeiro through the Linha Vermelha, the Red Line to Flamengo and Botafogo.

The sun climbed higher in the sky, and sent its warm rays to heat the earth. Inside the bus, the night chill gradually was replaced by pleasant warmth. The windows of the bus, which were shut during our nightly journey through the mountains between Minas and Rio, were opened one by one. We passed the city of Duque de Caxias and entered the Linha Vermelha highway. This highway would lead us further to Rio, and then deeper in the city itself. The bus driver did not know Rio very well, and had to maneuver the bus over various lanes to keep the correct direction. Unfortunately, none of us – including the driver – had a good map of the city. The Linha Vermelha (Red Line) is a continuation of the BR-040, the highway between Belo Horizonte and Rio. Next to the Linha Vermelha, there is also a Linha Amarela (Yellow Line), leading to the famous Barra da Tijuca, a renowned spa. We passed the building of “O Globo”, one of the biggest media companies of Brazil. It is an obvious building, with the roof that appears being lifted up by numerous pillars.

Then we passed the International Airport of Rio de Janeiro Aeroporto: Antônio Carlos Jobim, in short Tom Jobim, named after the exponent of Brazilian music, who died in 1994. He is considered to be one of the creators of the Bossa Nova. And also the famous “Girl from Ipanema” is from his hand. The airport is built on an island called “Ilha do Governador”. From this location it is about 20 kilometers to the center of Rio. And from the center to Ipanema is another dozen kilometers. A few silver aircraft buzzed above our heads, heading for the airport. At the airport, some tail wings of parked aircraft were visible. Near the center of Rio is another airport: Aeroporto Santos Dumont, named after the aviation pioneer, who made one of the world’s first flights, in Paris. This airport provides regional flights, mainly to and from São Paulo. 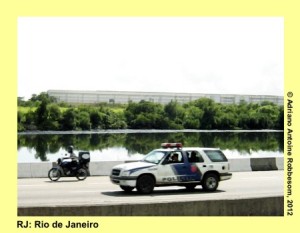 Just past the airport there was another island, Ilha de Fundão. It is an artificial island, which was created between existing small islands. This island is the base of one of the largest public universities of Brazil: the Universidade Federal do Rio de Janeiro, UFRJ abbreviated (OE-FFE-RRE-Jota). Until the seventies, this island was difficult to access, because the military junta then feared possible revolts by students against the regime. The island was not very visible from the highway. More visible was the port of Rio, just past the long bridge to Niterói. The port was easily recognized by numerous cranes and stacked shipping containers. Containers with names of well-known freight companies, and many containers originated from China. 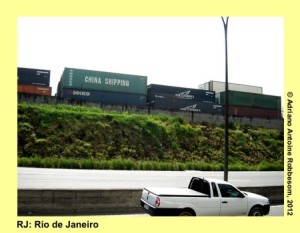 I was cautious with the use of my camera. I did not reveal the camera too often. After each picture I hid it from sight. Because we drove slowly, we were in a morning rush hour. Between the rows of vehicles, mobile vendors walked and cycled with bottled water, small snacks, and morning newspapers. Most of these vendors may have good intentions, and will have no interest in the property of the passengers. But a few would be interested, and they might snatch your belongings with a sudden and rapid movement out of your hands. I received this warning from a fellow traveler, who knew Rio very well. The others were also cautious and hid their belongings. 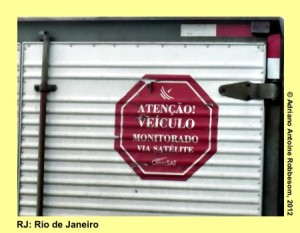 A truck drove next to us. One of the many. But this car had a octagonal-shaped sticker on the cargo hold. With a clear text indicating, that this vehicle is monitored by GPS, and that the driver has no influence on changing the planned route. Any deviation from his route may alert the highway patrol to take action. This advanced protection is intended as an effective weapon against truck thefts. An expensive but apparently practical solution. 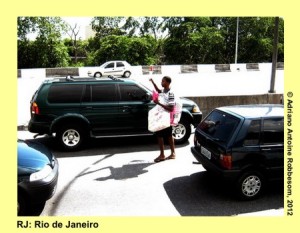