The World according to Brazilians (10): AMERICA – 4 (videos)

Brazilian TV channel Band broadcasts an interesting series (in Portuguese) about Brazilians living in various cities all over the world. They show the viewer the interesting locations – apart from the main touristic highlights – and tell what they know about. (copyright videos TV Bandeirantes)
YouTube link: O mundo segundo os brasileiros 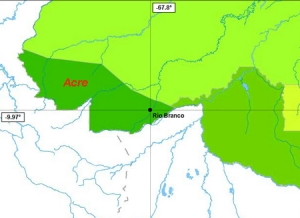 Rio Branco is capital of the state of Acre. The state of Acre is surrounded by the Brazilian state of Amazonas and the neighboring countries Bolivia and Peru. It is the largest city of Acre, with 305 thousand inhabitants (IBGE, 2009), hosting more than half of the state population. Rio Branco is situated at 153 m, and lies within an area of 9233 square kilometers. The human development index of Rio Branco is 0.754 (IBGE/PNAD,2000), well below of that of the cities in the southeastern part of Brazil. The city calls itself ‘Capital de Natureza’ (City of Nature), referring to the surrounding Amazon Forest. 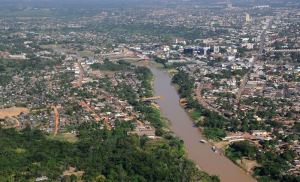 The city of Rio Branco, divided by the river.

In 1882, rubber planters were exploring the margins of the Acre River for new plantations. A gameleira, a kind of ficus, drew attention on the planters, and it was Neutel Maia, from the state of Ceará, who founded the settlement, according the stories. The new rubber plantation was called Volta de Empresa, close to the gameleira, who still is there. Nowadays it is part of the Second District. At that time this region was occupied by the indian tribes of the Aquiris, Canamaris, and the Maneteris. At the other – left – margin of the Acre River, Maia founded the Empresa Plantation. Nowadays it is occupied by the Palácio do Governo do Acre, the governor’s palace. At that time the region was part of Bolivia.

Twenty years later, in 1899, the Brazilian occupants initiated revolts against the Bolivian government, in order to free Acre from Bolivia, as an independent territory, only recognized by neighboring Brazil. Initially The Bolivian government managed to control the revolt, but the second upsurge became a victory for the revolutionaries. The treaty of Petrópolis ended the conflict, with Bolivia ceding Acre to Brazil, in exchange for a huge sum of money, and the construction of a connective railway between the two countries. In 1904 the settlement was renamed into Rio Branco (litt. ‘White River’), referring to José Maria da Silva Paranhos Júnior, better know as Baron Rio Branco. As a secretary for Foreign Affairs, the baron was responsible for the Treaty of Petrópolis. The city was completely isolated, until the construction of telegraph lines in 1913. In 1920, Rio Branco became the capital of the then Territory of Acre, which turned into a Brazilian state in 1962. 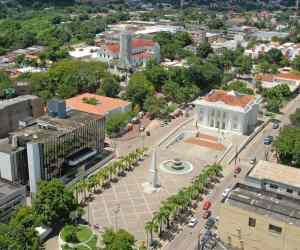 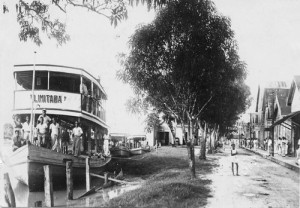 The gameleira tree, that drew attention to the first settlers, and who witnessed the two battles for Acrean independence, is still alive, and now is a central point in the city. The principal historic building is the Palácio Rio Branco, constructed in 1930. This former governmental palace, based on the classic Greek ionic style, has turned into a museum. The cathedral – Nossa Senhora do Nazaré – was inaugurated in 1959. The giant construction is based upon the basilica in Roman style, and consists of three separate naves. In the twenties of the past century, the Mercado Velho (‘Old Market’) emerged at the left margin of the Acre River. Part of the recently renovated Mercado still exhibits bazaars, bars, and stands that exist for more than forty years. A silent witness of the battles is the Igrejinha do Ferro (‘Iron Church’), that is made of galvanized laminates that were built by German engineers. One of the six connecting bridges is the Passarela Joaquim Macedo. This recently renovated bridge now has colored illumination that attracts many visitors at night. A large municipal park of 17 hectares is located 3 km from the center: Horto Florestal. 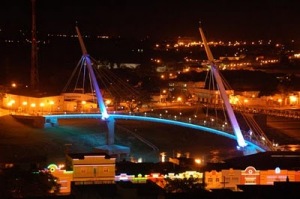 Ten km from Rio Branco is the Praia do Amapá, a 500 m beach of clear white sands, flanked by foliate trees. During July and August, a number of music festivals take place there. The state of Acre exhibits a national park, Serra do Divisor, of about 8400 square kilometers, in the far west, at the Peruvian border.This park consists of pristine Amazon forest, but is not publicly accessible, mainly because of the lack of infrastructure. 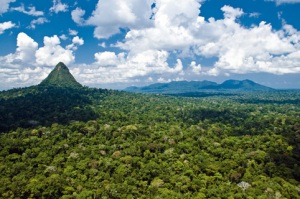 National Park Serra do Divisor, with Peruvian
mountains in the background