Travel in Brazil: SALVADOR (36). Itaparica Island, Late in the Afternoon

Destination Salvador, capital of the state of Bahia.
Photo impression of a late afternoon on Itaparica Island.

Itaparica Island is located in Baia de Todos os Santos (All Saints’ Bay), at a few kilometers distance from downtown Salvador.  The island is popular among tourists because of the beautiful beaches. Below a photographic impression of Ponta da Areia late in the afternoon. 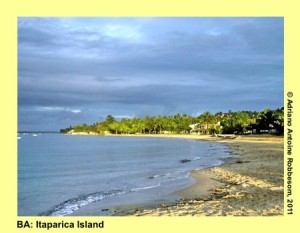 A warm sun, clouds disappearing, good for a
joyous afternoon. 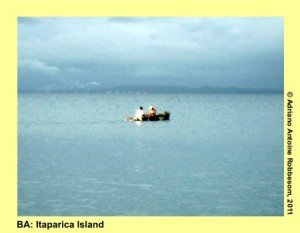 A fishermen’s boat, illuminated by the sun 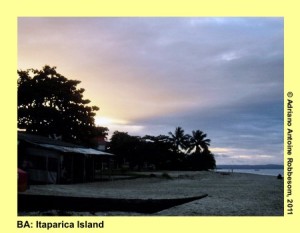 A colorful end of a joyous day on the island.

SALVADOR (35)
Natural life along the beach on Itaparica Island

Destination Salvador, capital of the state of Bahia.
Photo impression of natural life along the beach near Ponta da Areia on Itaparica Island.

Itaparica Island is located in Baia de Todos os Santos (All Saints’ Bay), at a few kilometers distance from downtown Salvador. The island is popular among tourists because of the beautiful beaches. The pictures below were made during a walk along the beaches near Ponta da Areia.

This appears more monstrous than it was in reality….

Crawling with its house

Not a colorful brush, but a stingy sea urchin 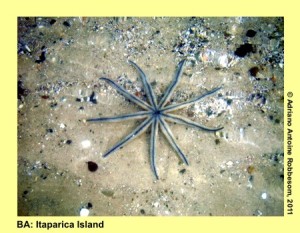 A starfish with nine arms

From above and from below 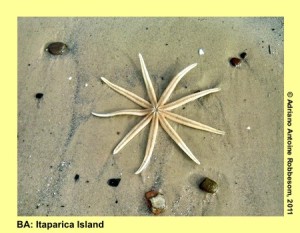 Destination Salvador, capital of the state of Bahia.
A day on Ponta de Areia Beach, on Itaparica Island.

>> Click here for more information about SALVADOR. (including videos) <<

We arrived ashore safely. We now had to find transport to the very end of Itaparica Island: Ponta de Areia. A distance of a few kilometers only, but too far to walk. We found our transport: an old, white kombi. The ‘kombi’ was a Volkswagen transport van, a rusty and spluttering biscuit tin. Our group of ten people entered the van. One of us sat in front, between the driver and his companion. 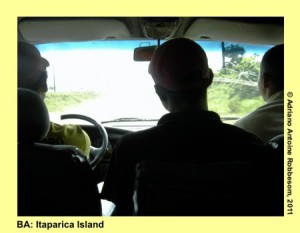 The ride to Ponta de Areia Beach took little more than fifteen minutes. The driver and his companion promised to pick us up at five. Because the boat back to Salvador was scheduled to leave at six. It was already half past twelve. We still had more than four hours left, to enjoy the beach. First thing what we had to do was to find a suitable barrack with the lowest prices. Carol, our reliable negotiator, did her work again. She looked at the price lists, the interior of the barracks, and talked with the waiters or owners. And she managed again: an owner offered us good discounts. He already seemed to dream about the many reais that he was about to receive from us. He offered us a simple but delicious meal: a large, fried fish with rice and salad. Now we only had to wait for our meal…

It was very quiet on the beach: only a few beach goers on this cloudy day. There were still dark, threatening clouds at the horizon. Suddenly there was a short cloudburst, but at that time, we were enjoying the fish dish. We were very grateful to Carol, who again had made an excellent choice. The fish was really delicious. The students ordered many beer bottles. Others ordered caipirinha, or limited themselves to soda. Local vendors arrived at ‘our’ barrack and showed us their merchandise: a rich variety in sea shells, jewelry, T-shirts. Especially the shells were very popular among us. The prices were not very low, but who can resist such souvenirs from this unique island? I bought two small shells. One vendor had an enormous starfish that drew attention from everyone. An enormous shell, of a type that I have seen before as part of an armature, was also impressive. This shell cost more than forty reais. I only paid five reais for my two tiny shells.

I started a walk along the beach, and I was joined by Igor and Leo. Because of the presence of dozens of sea urchins, we did not go too far in the water. The water was surprisingly clean: we were able to look in it for a few dozen centimeters. We observed the seabed in detail: stones, shells, waste material, and indeed, sea urchins. From time to time, we noticed a terrified crab running away, into deeper water. Another crab didn’t care about us and continued his fruitless attempts to consume a sheet of white plastic. Hopefully, this poor creature would find find out soon that there are more delicious and nutritious alternatives available. The clarity of the water, pretty close to the city of Salvador, surprised me much. I would expect that the water should be polluted, as is the case with water at urban beaches in, for example, Vitória and Santos, if I may believe the stories about these locations.

We went on with our beach walk. I had my digital camera ready, and I was cautious to prevent exposure of the camera to the water. We observed a lot of natural creatures during our walk: an enormous starfish, which had died. We turned this natural geometric figure on the beach, and I took pictures of it. We also encountered colorful sea urchins, with purple spines. Using small sticks, we turned this creature to my preferred locations, for making more pictures. Also a dead barracuda did not escape our attention. I washed this creature carefully with sea water, and positioned it in such a way, that it looked like a miniature sea monster. And indeed, with its spines and big eyes, it had a somewhat frightening appearance. We neared the end of this stretch of beach and returned. The others already had noticed my reputation as photographer and I was asked various times to take pictures of them. I had a lot to do that day…

Shortly after our arrival on the beach, when the sky was covered by heavy clouds, a peculiar ritual was performed. With the heel of a foot, a full circle was created in the sand. Lines were drawn from the perimeter of that circle, as if it were spokes of a wheel: it was a design of the … sun. As I was told, it is some kind of tradition, a superstition, to draw such a solar circle on the beach, on a cloudy day. Not one, but a few. As some kind of request to the weather gods, to provide us sun. Indeed, it had some effect: three hours later, we enjoyed the sun. Finally. We enjoyed very much our day on this beach, pretty close to Salvador. It is easy to imagine that even this distant beach must be crowded during Carnival. Since millions of tourists celebrate Carnival in the city, at least hundreds will visit Itaparica Island. During Carnival, the prices will be much higher… 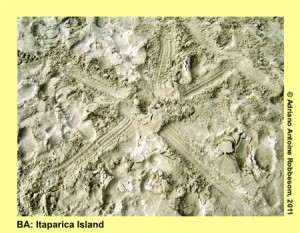 When we were there, it was in the winter season: few tourists, low prices. The sun set and created a breathtaking panorama of the beach and the water. Dark clouds that were shone by the sun that was approaching the horizon, an interesting scene. I was happy to witness it, before we had to return with the kombi. But… this kombi had a breakdown. Fortunately, the driver and his companion had managed to find alternative transport for us. On time even. This is not really the Brazilian way. The two rides cost us about five reais. A taxi is much more expensive, and these taxi drivers may only have foreign tourists as their customers, since these foreigners have no idea about the prices. In this case, it is very useful to be accompanied by Brazilians. They will find out the best and cheapest possibilities for you. I already had noticed it yesterday, and today we took our advantages again, spending less money.

Entirely according the Brazilian tradition, no one was ready to leave the beach at five. We had to pay the bill, and that turned out to be very complicated. According to another tradition, everyone has to pay his or her share, but the bill is made for the entire group. What had to be done, was to check the bill in full detail, and to split the values of the participants. Much time consuming! Again, Carol was the one who was doing this job. She was very experienced in that. She added, distracted, divided, multiplied, like she was doing it on a daily basis. I was able to help her a bit, since I was still able to make calculations without the use of a calculator. Well, when I was attending high school, there were no calculators available. Besides, I had some experiences with pay desks, when I worked in a restaurant at weekends. 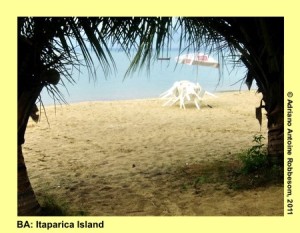