Belém, Metropole of the Amazon and City of the Mango Trees, is located near the mouth of the Amazon River. Thanks to the rubber trade between 1890 and 1920, the city gained international reputation, and once was considered as one of the wealthiest cities in the world. Belém is a city with a unique blend of people, cultures, smells, and tastes. Near Belém, the Marajó Island, world’s largest island completely surrounded by freshwater, is widely known for its nature and beaches.

Belém is the capital of the state of Pará, the second largest state in Brazil. The state is surrounded by the Atlantic Ocean, the neighboring states of Amapá, Maranhão, Tocantins, Mato Grosso, Amazonas, and Roraima, and the neighboring countries Guyana and Suriname. In December 2011, a referendum about the split-up of Pará into three smaller states (Pará, Carajás, and Tapajós) was rejected. The city of Belém little more than 1000 square km, the average altitude is 10 meters. According to numbers of IBGE (2011), the city hosts about 1.4 million inhabitants. The Human Development Index is 0.755.

Following the discovery of the Amazon River by the Spaniard Pinzón in 1500, Portuguese, English, Dutch and French expeditions arrived in the Amazon region in their search for the earth’s riches. It were the French, who managed to establish their colony in Maranhão and founded a settlement in Caeté (now Bragança). Bloody battles between the French, aided by the Potiguaras indian tribes, and the Portuguese, aided by the Tabajaras indian tribes, resulted in the expulsion of the French, and the forced moving of the Potiguaras to the region of Rio Grande do Norte.

Foundation of Belém, by Theodoro Braga (1908)

In order to maintain control of the mouth of the giant Amazon River, Francisco Caldeira Castelo Branco founded a fortress, at the right margin of the Guamá River where the river meets the Guarajá Bay, on January 12, 1616. The fortress was named Forte do Castelo do Senhor Santo Cristo do Presépio de Belém, in short Forte do Castelo or Forte do Presépio. Soon, a small settlement was created with a college and a church run by Jesuits. Initially, the settlement was named Feliz Lusitânia, referring to motherland Portugal. The name was changed in Santa Maria do Grão Pará, followed by Santa Maria de Belém do Grão Pará, and finally by Belém do Pará.

More fortresses were built by the Portuguese: Forte de S. Pedro de Nolasco (Convento das Mercês, in Belém), Forte N. S. das Mercês da Barra, Forte S. Antônio de Macapá, Casa Forte (origin of the city of Ourém), Forte de N. S. de Nazaré, Forte da Embocadura do Rio Tuerê, Forte do Rio Paru, Forte do Tapajós (future Santarém), and Forte do Pauxis (origin of the city of Óbidos). They were built in order to protect the Amazon region against invaders during the 17th century. Between 1617 and 1621, Forte do Castelo was attacked by indians of the Tupinambas tribe, commanded by the legendary chief Guaimiaba. In reaction, the fortress became reinforced various times. The Portuguese also started to destroy fortresses that were built by the Dutch: Forte de Nassau (1623), Forte de Mandiatuba (1625), and Forte de Maiocaí.

Castelo Branco was accompanied by padre Manoel Figueiredo de Mendonça, who held the first mass in Belém and started the mission to convert indians as Catholics. In 1643, padre Antônio Vieira arrived in Belém, and expanded the missions deeper into the Amazon region. The missionaries unified the various Tupi dialects into one Tupi language, and wrote grammar and dictionaries.

On January 31, 1751, the capitania of Maranhão was transformed into the much larger capitania of Grão-Pará and Maranhão, which contained the actual states of Amazonas, Roraima, Pará, Amapá, Maranhão, and Piauí. The capital was transferred from São Luís to Belém do Pará. Until the independence of Brazil in 1822, the capitania of Grão-Para had undergone various territorial and administrative changes. Because of the long distance with the government in Rio de Janeiro, and the strong ties with motherland Portugal, Belém recognized the independence of Brazil about one year after its declaration of independence, on August 15, 1823. 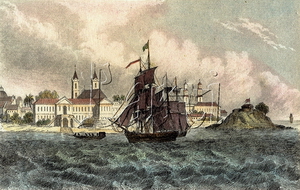 Between 1835 and 1840, a popular movement that demanded for independence emerged, and ended in a bloodshed. According to some sources, more than 100 thousand people were killed in this revolt. The independence of Brazil did not change the poor conditions for the greatest part of the civilians in Belém: the indians, blacks, and mestizos.

Around the start of the 20th century, which is called the ‘Ciclo da Borracha‘ (Rubber Era), Belém gained international commercial importance, and gained the nickname ‘Paris of America’. In this period, important buildings were constructed, such as Palácio Lauro Sodré, Teatro da Paz, and Mercado Ver-o-Peso, among others. Meanwhile, many migrants from Portugal, China, France, Japan, and Spain arrived and participated in the development of agricultural activities. Especially the Japanese made Pará one of the greatest exporters of pepper.

The Golden Rubber Era around the start of the 20th century provided Belém regional, national, and international importance. Nowadays, container transport takes place from the Port of Belém to American and European ports. There are a number of major industries in the city, dealing with metallurgy, food, chemical products and timber. Other economic activities are services and tourism. One of the largest touristic events in Brazil is the annual Círio de Nazaré procession. which attracts large number of tourists. As the gateway to the Amazon Forest, national and international tourist arrive and spend their time in Belém.

Belém is rich in history, in culture and in nature; the nature of the numerous islands that surround the city, and the vast Amazon Forest nearby. Belém is also rich in colors, smells and tastes, resulting from a unique melting pot of European, African and Indian cultures. taken together with the rich cuisine, the colorful folklore, in a close harmony with the nature, these blends make Belém as one of the most popular destinations in Brazil. 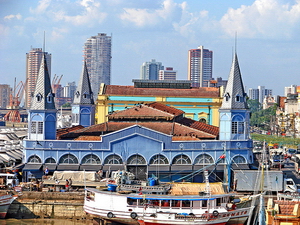 One of the principal locations in Belém is undoubtedly Mercado Ver-o-peso. The large market hall, painted in light blue, and with four towers at its corners, is a must-see for tourists. In the early morning, numerous boats arrive with merchandise from the nearby islands, and from locations further upstream or downstream. From açai berries to fresh meat, from fresh herbs and perfumes essentials to fresh fish, all is available. 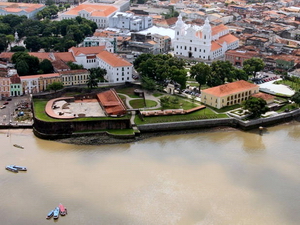 About ten years ago, Belém tried to include its historical center on the UNESCO World Heritage List, without success. Nevertheless, it is now listed with 2800 items on the Brazilian Heritage List. Next to the Ver-o-peso is the Feliz Lusitânia nucleus, with constructions dating back from the 16th and 17 century. These include the Catedral, the Santo Alexandre church, Arte Sacra (Sacred Arts) museum, and Forte do Presépio, the first construction in Belém. The Casa das Onze Janelas (House of the Eleven Windows) once was a military hospital, now hosts exhibitions of modern and contemporary art. From this nucleus, beautiful views may be witnessed of the Guajará Bay.

In the second half of the 19th century, three giant warehouses of English wrought iron were erected as part of modernization of the harbor facilities: Estação das Docas, characterized by external American cranes. Now it serves as a cultural and touristic center with spaces for events, and a number of bars and restaurants.

The Basílica Santuário de Nazaré (1909), in neoclassical and eclectic style, is inspired upon the St. Peter in Rome. During the Círio de Nazaré procession, the image of Virgin Mary of Nazaré is carried from the Catedral to the Basílica. The interior of the Basílica is decorated with marble, and contains stained glass and wood artworks.

Belém is called ‘Cidade das Mangueiras‘ (City of the Mango Trees). A number of mango trees is found at Praça da República, one of the landmarks of Belém. At this square, Theatro da Paz is one beautiful example of the Golden Rubber Era. The full name is Theatro Nossa Senhora da Paz, as a remembrance of the end of the Paraguayan War (1864-1870). The neoclassical building was constructed between 1869 and 1874. The theater is the largest in the North of Brazil, and is considered as one of the most luxurious in the country. 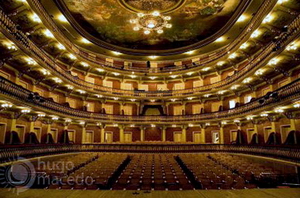 The Belle Époque also resulted in the construction of small palaces, the so-called palacetes. One of the better known is Palacete Bolonha (1905), named after the architect Francisco Bolonha. The palace in art nouveau style once served as town hall. Other characteristic palacetes are Palacete Pinho, Palácio Antònio Lemos, Palácio Lauro Sodré, Palacete Faciola. The same Antonio Faciola donated the 12 meter high clock tower (1930) at Praça Siqueira Campos, named after one of the surviving lieutenants of the ’18 of Copacabana’ revolt in 1922.

One of the most popular touristic locations outside Belém is Ilha de Marajó. This island, located at the mouth of the Amazon River, is the world’s largest that is completely surrounded by freshwater. The island has the size of The Netherlands, and counts about 250 thousand people. Breves, with a population of 100 thousand is the largest city. Tourists arrive here for the stretched, deserted beaches, and to visit natural scenes. Marajó also hosts a large population of domesticated water buffaloes. Salvaterra and Soure are other major cities on the island. 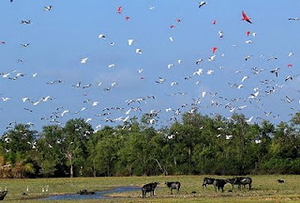 Near the city of Belém is the smaller Ilha de Cotijuba, that may be reached from Belém by boat. This island contains a number of small, beautiful beaches.

At more than 200 km distance is Salinas, or Salinópolis, located at the Atlantic Ocean. It is a popular beach of the people of Belém. Not far from Salinas is a small island, Ilha de Maiandeua, or better known as Ilha de Algodoal. Cars are not allowed to enter the island, and only in 2005, the island received electricity.
At 220 km northeast from Belém is the historic city of Bragança. The city is also located at the Atlantic Ocean and hosts a number of beaches. In December, tourists gather to witness the Marujada Festival.

Much more distant from the capital, but near the city of Santarém (about 1600 km from Belém), is one of the most beautiful beaches of Brazil: Alter do Chão. According to the British newspaper ‘The Guardian’, the beach is the most beautiful among the freshwater beaches in the world.