The oldest state capital in Brazil, Recife is one of the largest cities in the Northeastern region. Under the name ‘Mauritsstad’, Recife was the capital of Dutch Brazil (1630-1654). Recife now is a modern city, popular among tourists for its multicultural carnival and the idyllic beaches. For the existence of at least 50 bridges, Recife is nicknamed as ‘Venice of Brazil’.

Recife is the capital of the state of Pernambuco. Pernambuco is surrounded by the Atlantic Ocean in the east, and by the following Brazilian states, clockwise: Alagoas, Bahia, Piauí, Ceara, and Paraíba. Recife now counts more than 1.5 million inhabitants (Censo IBGE, 2010); Greater Recife hosts 3.7 million inhabitants. The coastal city is located at an average height of 4 m, the city area is a little more than two hundred km2. The Human Development Index is 0.797 (2000), a little lower than that of Salvador.

Pera a parte do sul, onde a pequena 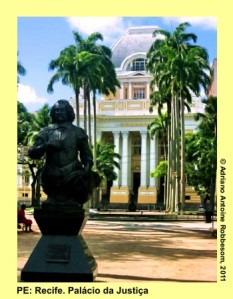 Bento Teixeira described for the first time the region of what is now Recife. In the first decades after the discovery of Brazil in 1500, Portugal did not have enough resources to develop the colony. However, the capitania of Pernambuco became on of the most flourishing, thanks to the introduction of sugarcane plantations by Duarte Coelho Pereira. Initially, indians were captured to work in the plantations; they were succeeded by African slaves, who were cheaper and easier to handle. From 1580 to 1640 the kingdoms of Spain and Portugal were united. At that time, Spain was at war with the Netherlands, who wanted to free themselves from the Spanish domination. As a result, the Dutch, main traders of sugar in Europe, were blocked from visits to Brazil. The Dutch decided to invade the Brazilian colony.

Dutch vessels in front of Recife

On February 16, 1630, the Dutch fleet of 67 vessels and 7000 men, commanded by Hendrick Lonq and Diedrich van Waerdenburch, invaded Pernambuco. This was the start of the Dutch colony in the northeast of Brazil. The Dutch continued conquering northeast Brazil, and burned neighboring Olinda. Recife became the new capital of Dutch Brazil, under the name ‘Mauritsstad’. In 1637, count Johan Maurits van Nassau, from German origin, was appointed as governor of the Dutch colony. The count invited Dutch artists Frans Post and Albert Eckout, and scientists as Willem Piso and Jorge Marcgrav. The city began to prosper and quickly became one of the cosmopolitan cities in the word, at that time. The count was dismissed in 1643, while Portugal had freed itself from Spain three years earlier. The Portuguese in Pernambuco started to revolt on June 13, 1645: The Insurreição Pernambucana. Two important Battles of Guarapes were won by the Portuguese, the Dutch were forced to leave Brazil in 1654. The treaty of The Hague in 1661 made a definitive end of the Dutch influence in Brazil.

Portuguese migrants occupied the spaces left behind by the Dutch. To the dismay of the people of Olinda, Recife began to prosper. The distrust between the peoples of Recife and Olinda resulted in an armed conflict: The War of the Mascates (nickname for Portuguese migrants). Despite this war, Recife kept on flourishing, and was elevated to the status of a village in 1710. At that time, about 16 thousand people lived in Recife.

The oldest synagogue of the American continent

One century later, on March 6, 1817, a revolt started against the Portuguese domination. Two months later, the Portuguese managed to repress the revolt, the leaders were condemned to death. Recife became upgraded to the status of a city, on December 5, 1823. The Brazilian independence in 1822 did not remove the insatisfaction of the people of Pernambucano with the government. In 1824, the Confederation of the Equator was formed. Also this movement was repressed, one of the leaders, Frei Caneca, was condemned to death and was fusillated. On February 15, 1827, Recife replaced Olinda as the capital of the province (now state) of Pernambuco. In 1848, inspired upon the numerous revolutions that took place in Europe, a movement of liberal radicals demanded for reforms from the federal goverment and the local landowners. The rebellion, which started near the beach: therefore named ‘Praieira Revolution’, had spread quickly through the state, but the number of participants did not increase significantly. One year later, the rebellion was dispersed by government forces. In 1988, the state of Pernambuco gained responsibility over the archipelago of Fernando de Noronha, now a national park.

Already in the colonial era, Recife was an important center of commerce, predominantly with Portugal. At that time, mainly sugar products were traded. At present, the services sector accounts for 95 percent of the economic activity in Recife. Recife hosts a large number of shopping malls and supermarkets, a sophisticated medical sector, with modern hospitals that receive patients from neighboring states. Recife counts four universities and hosts several companies of the information technology sector. Tourism is also an important economic factor, since the coastal area of Recife is famous for its beautiful beaches. Porto de Galinhas, about 60 km south of Recife, has gained several times the title ‘best Brazilian beach’. 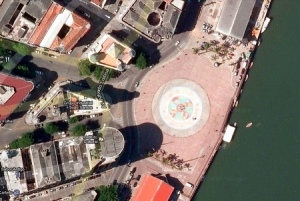 The historical heart of Recife is ‘Marco Zéro‘: the landmark of the ‘birth’ of the city. Nowadays, the location is decorated with a giant compass card, including the names of the planets. Not far from this location is a quote from the Brazilian artist Cicero Dias:

“Eu vi o mundo, ele começava no Recife”
“I have seen the world, it started in Recife”

Small boats may transport passengers to the barrier that is parallel to the coastline. There is a small park with sculptures: Parque das Esculturas, with creations of the Brazilian artist Brennand. The Marco Zéro is surrounded by tall historical buildings; some of them resemble the typical architectural styles as seen in Dutch historical cities. The oldest synagogue of the American continent, the Kahal Zur Israel, is located here, in Rua de Bom Jesus. In the same street is an observatory, the Torre Malakoff. From this district , that is called ‘Recife’, various bridges connect this tiny island with the island of Antônio Vaz. The oldest is the ‘Maurício de Nassau’-Bridge, dating from 1640. The original structure was replaced in 1917. Four statues flank the oldest bridge of Brazil.

The Santo Antônio district hosts various historical locations: The Praça da Republica is surrounded by the Palácio da Justiça, and the Palácio do Campo das Princesas, the seat of the government of the state of Pernambuco, and teatro Santa Izabel. In the middle of this island is located the historical fortress: Forte das Cinco Pontas, originally named Fort Frederik Hendrik by the Dutch. At the other side of this island, one may visit the former prison, now the Casa Cultura with an elaborate assortment of local handicraft. The historic center also hosts a number of historic churches. The Basílica and Covento da Nossa Senhora do Carmo was constructed on the location of the Palácio da Boa Vista, that was built by the Dutch. The Capela Dourada da Ordem Terceira de São Francisco is one of the most impressive examples of Brazilian baroque: the interior is fully covered by gold leaf. 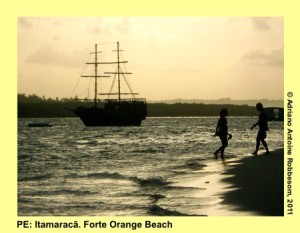 Recife is also famous for its festivals. By far the most popular is the multicultural carnival. The ‘Galo da Madrugada’, the world’s largest carnival group, is held on Saturday, during the carnival week. More than two million people from all over Brazil join and enjoy the ‘alegria’ of frevo music and dance. Click here for photos of this event. In June, another widely known festival is being held: São João. This festival lasts almost one month, with a large variety of local dance (quadrilhas) and music. Click here for photos of the festival.

Olinda is a neighboring city, its historical center is included in the UNESCO World Heritage List. The tiny historical center with many colorful houses, small and steep streets with cobblestones, and historical churches is very popular among tourists. During Carnival, the center is crowded by people dancing behind the carnival groups (blocos).

Recife – Past and Present

Hymn of the Galo da Madrugada