Belo Horizonte, a modern city planned in late 19th century, is situated within the triangle São Paulo – Rio de Janeiro – Brasília. The city, with its wide avenues, is built on several hills, and completely surrounded by mountains. Many tourists arrive in Belo Horizonte to continue their travels to the beautiful historic mining cities of Minas Gerais: Sabará, Ouro Preto, Mariana, Congonhas, Tiradentes, São João del Rei, and Diamantina. Belo Horizonte is one of the host cities during the World Cup in 2014.

Belo Horizonte (nicknamed Beagá) is the capital of Minas Gerais, located in the southeastern region of Brazil. Its metropolitan area with 5.4 million inhabitants is the third largest of Brazil, following greater São Paulo and greater Rio de Janeiro. The city itself is the seventh-largest city in the country, with approx. 2.5 million inhabitants (IBGE, 2010). The city is situated at an average altitude of 852 m, and lies within an area of 331 square kilometers. The human development index of Belo Horizonte is 0.880 (IBGE/PNAD, 2008), the city was indicated as the city with the best quality of living in Southern America and among the best 50 in the world (UN Population Crisis Committee, 1990). 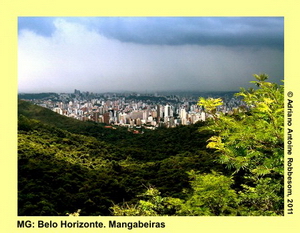 In the search for gold, bandeirantes (pioneers) traveling from São Paulo were exploring the margins of the Rio das Velhas. Bandeirante João Leite da Silva Ortiz founded a small farm in 1701, named Curral del Rey. This farm became prosperous and attracted other settlers from the region. Soon Curral del Rey became a village. Other pioneers that were following the stream of the larger São Francisco River also passed at Curral del Rey, where they visited the chapel of Nossa Senhora da Boa Viagem, Our Lady of the Good Travel, praying for a safe journey.

Soon after the proclamation of the Republic of Brazil, which ended the Brazilian Empire, the republicans in Minas Gerais decided that Ouro Preto, symbol of imperial Brazil, should no longer be capital of Minas, but that a new modern city would become the new capital. Western cities as Paris and Washington became examples for the structure of the new capital, that initially was named Cidade de Minas. But less than a decade after the inauguration on December 12, 1897, the capital was renamed Belo Horizonte, its actual name.

Originally, the city was constructed to host 250 thousand inhabitants, but less than fifty years later, this number was surpassed. During the 1940s, young Oscar Niemeyer, now Brazil’s most famous architect, started to design the Pampulha District, with its artificial lake, surrounded by architectural landmarks. Especially in the final two decades of the past century, Belo Horizonte expanded exponentially, thereby extending its city limits far beyond the originally designed city limit, the so-called Avenida do Contorno, that now surrounds the actual center of Belo Horizonte.

Belo Horizonte is the economic center of Minas Gerais; the metropolitan area contributes for about one-third of the entire economic activity in Minas Gerais. The city is the fourth richest of Brazil, after São Paulo, Rio de Janeiro, and Brasília. The service sector contributes for more than eighty percent, while the share of the industrial sector is less than twenty percent. The city boasts to have good infrastructure, linking Belo Horizonte to Rio de Janeiro, São Paulo, and Brasília through highways, and to Vitória by a railway. The modern Confins airport, 50 km from the center, hosts a growing number of airlines with national and international destinations.
Besides a refinery, metallurgical industries, and the Fiat automobile industry, Belo Horizonte hosts a large number of smaller industries, such as textiles, chemicals, pharmaceuticals, cosmetics, and food. Belo Horizonte hosts more than three thousand national and international events, hosted in large and well-equipped exposition areas, thereby gaining importance in the so-called business tourism.

Although many tourists consider Belo Horizonte as a hub to the beautiful historic cities in the region, the city hosts various locations of touristic interest. The already mentioned Pampulha District with the artificial lake bearing the same name, and the architectural creations surrounding the lake. Most popular is the tiny, light blue church with the roof in a curved shape: Igreja de São Francisco de Assis. Other notable buildings are the Museum of Contemporary Arts (a former casino), the Ballroom Hall (Casa do Baile) and the IATE Tennis Club. Along the lake are also the ZOO annex botanical garden, and the ecological park, representing the local flora and fauna. Close to the lake one may find one of the world’s largest soccer stadiums, that also will be host during the 2014 World Cup: the Mineirão Stadium, bearing the official name Estádio Governador Magalhães Pinto. Next to the stadium is a university campus of the Federal University of Minas Gerais.

Downtown one may find the heart of Belo Horizonte: Praça Sete de Setembro, with an obelisk in its center. This obelisk marks the centenary of Brazil’s independence from Portugal. The former railway station at Praça da Estação now hosts the museum of arts and crafts (Museu de Artes e Ofícios). The principal square is Praça da Liberdade, Liberty Square. The square divided by a double row of imperial palm trees, and is surrounded by a number of former executive offices of the governor, who has his residence in the Palácio da Liberdade. The buildings are now being reformed to host a range of museums. Just outside the Avenida de Contorno one may find the only remaining building – a ‘casarão – that has survived the demolition of the former village to make place for the new city. It now hosts part of the collection of Museu de Abílio Barreto.

More to the south, and uphill, one may encounter Praça do Papa, the Pope’s Square, where late pope John Paul II held an open-air mass for more than half a million youths, in 1980. Behind this square is the entrance of the biggest park of Belo Horizonte: Mangabeiras, once a mining location. Another park, downtown, is the Municipal Park, that was inaugurated together with the city itself. Close to the park, at the Avenida Afonso Pena, the Feira Hippie, the largest open market in Southern America hosting a large number of stands offering a range of arts and handicrafts, is being held every Sunday, attracting about 70 thousand visitors. Belo Horizonte is widely known for its presence of more than 14 thousand bars, spread throughout the city, although the Savassi District is widely known for its nightlife.

There are some historical mining cities worth visiting, outside Belo Horizonte. Almost all these cities have a historic center with a certain richness of buildings in baroque style. A large amount of these baroque art works are attributed to sculptor Francisco Antônio Lisboa,better known for his nickname Aleijadinho, the ‘little cripple’. In Congonhas (about 70 km south of Belo Horizonte) there are statues of twelve prophets and the statues of the Passion of Christ, sculpted by Aleijadinho (and his pupils).

South of Congonhas, are the cities São João del Rei and nearby Tiradentes. Both cities contain many churches in baroque style and mansions from the same era. Nearby Belo Horizonte is Sabará, another historical city, and also known for the Carnival.
At, about ninety kilometers south of Belo Horizonte, two former capitals of Minas Gerais are located close to each other. The first capital was Mariana, known for the two churchs built next to each other: Igreja São Francisco and Igreja Nossa Senhora do Carmo.

Ouro Preto succeeded Mariana as capital; at that time, the city was known as Vila Rica. Ouro Preto hosts a large number of historical churches and mansions, and was added to the World Heritage List of the UNESCO in 1980. At the local market in the center, one may obtain beautiful soapstone sculptures for a reasonable price.
More distant from Belo Horizonte is Diamantina, birthplace of former president Juscelino Kubitschek, who also was major of Belo Horizonte. Diamantina is also on the UNESCO World Heritage List.

Click here for the daily sets of photographs, as provided by the City of Belo Horizonte