Salvador, originally named as São Salvador da Bahia de Todos os Santos, was the first capital of Brazil, from its foundation in 1549 until 1763. Salvador is called ‘The City of Happiness’, famous for the large-scale (carnival) festivities within its borders. Salvador is notable for its music and cuisine, representing a blend of European and African influences. The major landmark of Salvador is the Lacerda Elevator, connecting the lower and higher parts of the city. The historic center, known as Pelourinho, is a World Heritage site since 1985. Salvador is one of the host cities during the World Cup Soccer in 2014. 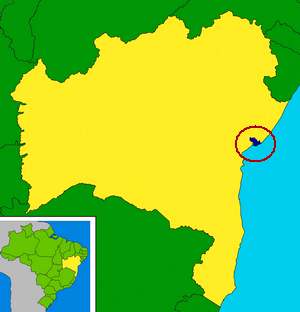 Salvador is the capital of the state of Bahia. Bahia is surrounded by eight Brazilian states: clockwise: Espírito Santo, Minas Gerais, Goiás, Tocantins, Piauí, Pernambuco, Alagoas, and Sergipe. Salvador counts almost 2.7 million inhabitants (Censo IBGE, 2010), and therefore is the third largest city of Brazil. Greater Salvador counts more than 3.5 million people. The coastal city is located at an altitude of 8 meter, the city area is a little more than 700 square km. The Human Development Index is 0.805, one of the higher values in the northeastern region. 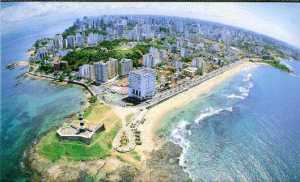 On November 1, 1501, a Portuguese expedition, arrived in Bahia de Todos os Santos, the All Saints’ Bay. The area became inhabited in 1510, with survivors of a ship wreckage with a French vessel. One of the survivors was the Portuguese Diogo Álvares Correia, nicknamed Caramuru by the tupinambá indians. The indians wanted to devour him, but he demonstrated his powers by killing a bird with his gun. Caramuru lived with the indians, married an indian, and became of significant importance in the first contacts of the Portuguese with the indians. The strategic location of Bahia de Todos os Santos inspired the Portuguese king to construct a city there. The king appointed Tomé de Sousa as governor-general of the Brazilian colony. Caramura was appointed to use his knowledge of the location and the indians to facilitate the creation of the new city. Tomé and Caramuru arrived on March 29, 1549, the official date of the foundation of the city of Salvador. From that day, Salvador became the capital of colonial Brazil. 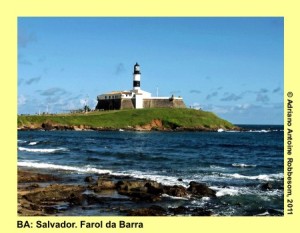 One year later, the first African slaves arrived; thanks to their labor, the city prospered, as the principal commercial center, and as the main port for export and of cane sugar, cotton, tobacco, and cattle. The richness attracted many foreigners, who wanted to conquer the city. The Dutch managed to invade Salvador, in May 1624, and occupied the city of eleven months. In 1638, under the command of Maurício de Nassau, the Dutch tried to invade again, but did not succeed this time.

On August 12, 1798, Salvador awoke with the first rumors of the so-called Revolta dos Alfaiates. The revolutionaries wanted to abolish slavery, to create the Republic of Bahia, to lower the taxes, to liberate trade, and to raise the soldiers’ salaries. Repression of this revolt resulted in a large-scale persecution and the hanging of four leaders: their heads were exhibited at strategic locations in the center.
In 1808, Salvador was chosen to host the Portuguese royal family, who left Portugal when Napoleon was advancing their nation. The crown prince opened the Brazilian ports, including Salvador, for befriended nations, and opened the first medical school in Brazil.

On September 7, 1822, Brazil declared itself independent, but Portuguese troops continued to occupy Bahia and Salvador, until July 2, 1823. On this day started the complete independence of Brazil. On August 12, 1835, during the Ramadan, slaves and freedmen, inspired by Muslim teachers, tried to liberate one of their leaders. The rebels suffered tough resistance from the Brazilian army, their attempt failed. Despite this failure, the so-called Revolta dos Malés became a turning point in Brazilian history, concerning slavery.

A dispute between two political rivals escalated into an armed conflict. When one of the rivals, Aurélio Viana took office as governor, he decreed to move the capital from Salvador to Jequié. He was ordered to revoke this decision, but he replied with the occupation of strategic points in Salvador. On January 10, 1912, the center of Salvador was bombed, thereby destroying the Governor’s Palace, and the Public Library. The complete historic collection was lost forever. In 1985, the historic center was added to the World Heritage List of the UNESCO. Salvador is one of the twelve cities that will host matches during the World Cup Soccer in 2014.

Already in the colonial era, Salvador was one of the most important locations because of its status as capital of colonial Brazil, until the capital was transferred to Rio de Janeiro in 1763. The city, with its port facilities, served as an essential link to the Portuguese empire, maintaining commercial ties to the motherland and the colonies in Africa. At present, Salvador is the second most visited tourist location in Brazil, after Rio de Janeiro. Tourists find a unique combination of history, architecture, beaches, and various cultural events in Salvador. Besides tourism, services, car industries, and (petro-)chemical industries contribute in great part to the prosperity of the capital of Bahia.

The historical center of Salvador, also known as ‘Pelourinho’, was added to the UNESCO World Heritage List in 1985. Pelourinho is located in ‘Cidade Alta’, the higher part of the center, constructed along the ridge parallel to the Atlantic coast. The ridge served as a natural barrier against Spanish and Dutch attacks in the 16th and 17th century. The center constructed around Pelourinho is based upon a 16th century urban plan. There exists a well-accepted joke that Salvador hosts at least one church for every day; indeed, the city counts hundreds of churches. The most popular church is not situated in Pelourinho: Igreja de Nosso Senhor do Bonfim. In Pelourinho, tourists may receive colorful ribbons with the blessings from this church.

Pelourinho hosts a considerable number of churches of various architectural styles: Flanking the Terreiro de Jesus, are three churches in rococo style: Catedral Basílica, Igreja da Ordem Terceira de São Domingos, andIgreja de São Pedro dos Clérigos. The two bright towers of Igreja da Nossa Senhora do Rosário dos Pretos, in rococo style and constructed by the black (slave) population, apeear on almost every Pelourinho postcard. One of the most impressive churches in Brazil is the Igreja de São Francisco, with the ornaments covered with gold leaf. Another important church, along the ridge, was the Igreja da Sé. This church was demolished in 1933, to make space for the construction of a tram terminal. At present, a monument remembers this lost church: ‘cruz caída’, the fallen cross. Next to the fallen cross is the Palácio Arquiépiscopal, the palace of the archbishop. Following the ridge, another palace is visible: Palácio Rio Branco. This bright building in eclectic style was the former seat of the government of Bahia. Not ot be missed is the Lacerda Elevator. This 72 m high elevator, connects the higher and the lower part of the center. At the basis of this impressive elevator, one may visit the Mercado Modelo. This market is famous for artesanato: handicraft from the region. Below the indoor market, the slave cellars may be visited, to obtain a certain impression of the miserable circumstances of slaves arriving in Brazil.

Next to Mercado Modelo, one may board ferry heading for the Island of Itaparica. This island is situated in the Baia de Todos os Santos, the All Saints’ Bay. Itaparica is known for its beaches and delicious dishes with fish and seafood. South of Pelourinho, is another landmark of Salvador: the Farol da Barra: de Barra Light tower. The black and white tower is situated on a peninsula and flanked by two popular beaches: Farol de Barra, and the more serene Porto da Barra.

Salvador is world famous for its beaches. When heading north, beaches of Jardim de Allah, Itapuã, Boa Viagem, and Stella Maris are very popular. More distant is Praia do Forte, with a turtle monitoring station of Projeto Tamar. South of Salvador, one may travel to the city of Ilhéus and further down to tiny Olivença, for more beautiful beaches. 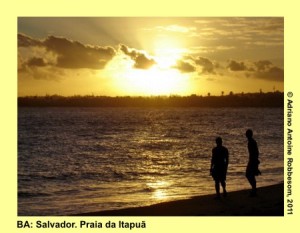 Salvador is also Carnaval. As one of the four major cities of carnival in Brazil (other cities are Rio de Janeiro, São Paulo, and Recife), Salvador may host millions of visitors to enjoy tropical sounds of axé, or vibrate with trios elétricos. More traditional are the afoxé rhythms of Filhos de Gandhy, and the drum beats of Olodum, or Didá, its female counterpart. The latter percussion groups regularly parade through the center of Salvador, in Pelourinho. Many Brazilian musicians are born in Salvador: Gilberto Gil, Caetano Veloso (Santo Amaro), both representing Brazilian popular music, are among the most popular.