(Click here for the complete overview of ‘A Foreigner in Brazil 2006′)
.

Experiences of a Dutchman living in Belo Horizonte, since December 2004, from month to month.
July 2006, part three: A lazy day at Olivença Beach (Bahia) 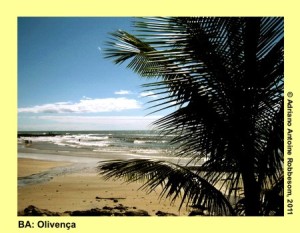 We were on the way for Belo Horizonte to Salvador, by bus. In Bahia, a few hours from Salvador, we made a stop in Olivença. Olivença is a small beach village, just below the better known Ilhéus. We arrived there late in the afternoon, we were lucky to witness the final part of a beautiful sunset. A number of fellow travelers arranged an abandoned house to spend the night. My travel companion Carol had put me on top of the list of fifteen selected. Others set up their tents, or spent the night inside the bus. At day, we enjoyed a lazy day at the beach. For many Brazilians, an ideal beach day consists not only of many sun hours, a white beach, and lukewarm seawater. They prefer to sit on a plastic chair instead to lie down on a beach towel. They like to order ice-cold beers or caipirinhas, combined with simple but delicious beach snacks. They also have a strong preference for a location with good (Brazilian or international) music, and the possibility to have a cheap but delicious warm meal, around noon. It is not uncommon that Brazilians negotiate for some time with the owners of the barracks, who often give in to a certain extent. They prefer to host a large group of walking money pockets. At the end, both parties are satisfied: students spend less money with food and drinks, the owners run a large turnover. Because students have the reputation to consume a lot… 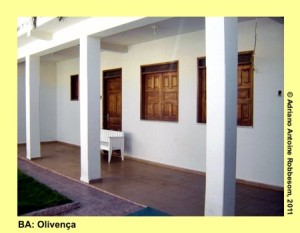 Fifteen fellow travelers spent the night in this
abandoned house 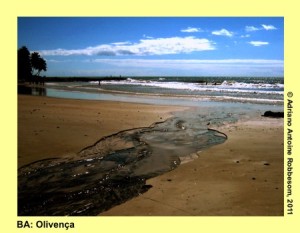 A tiny river flows into the Atlantic Ocean 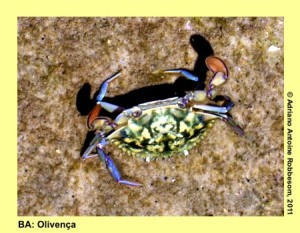 Mussels with vegetables, a local snack

A beautiful day ended with a breathtaking sunset.
.