Close Ties Between The Lebanon And Brazil

Close Ties Between The Lebanon And Brazil
.
.
.
.

Brazil hosts the largest Lebanese community, outside The Lebanon.
In The Lebanon, many Brazilians with Lebanese roots live there. 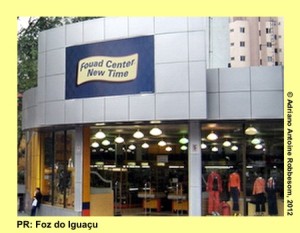 A clothes store with an Arab name,
in Foz do Iguacu

Brazil hosts the largest Lebanese community outside The Lebanon. It is estimated that 7 to 12 million (depending the source) are Lebanese and Brazilians with Lebanese roots, about twice the total number of inhabitants in The Lebanon. The first Lebanese migrants were predominantly Christians; most migrants who have arrived since the Seventies of the past century are Muslims. By far the greatest part of the thirty thousand Muslims in Brazil originate from The Lebanon. According to news site Globo, about two hundred thousand Brazilians live in The Lebanon. Most of them are naturalized Brazilians and have worked and lived for a long time. At least two hundred Lebanese families or family members stay in The Lebanon, visiting their relatives or as tourists. At the time of the large scale Israeli air raids in 2006, it was uncertain whether and when they would return to Brazil. Four Brazilians, who died in these raids in 2006, were from Foz do Iguaçu, a Brazilian city that is world famous for its waterfalls. This city hosts the second largest Lebanese community on Brazil. The family, with two small Brazilian-born children, was constructing a little house for spending their holidays in the Middle East. They were intending to return to Brazil later that year.

Lebanese migrants have arrived in Brazil since the end of the 19th century. A Lebanese migrant even has played an important role in Brazilian history. Antum Elias Lubbos offered his house to the Portuguese king, Dom João VI. That house became an imperial residence, and Brazilian emperor Pedro II was born there. Many Lebanese migrants started as traveling sales representatives, who tried to sell their merchandise from door to door. They used their profits to establish their own small businesses. A large part of their income contributed to the development of their homeland, The Lebanon. Brazilian communities are found in The Lebanon, where people speak Portuguese and where tourists may enjoy traditional Brazilian dishes. Most of these Brazilian Lebanese have migrated to The Lebanon since the end of the past century, after spending a great part of their lives in Brazil, where they got married and got children.

The mosque, constructed in 1972 – facade

The Lebanese cuisine has conquered its fame, next to the traditional Brazilian cuisine. Many societies and buildings have been established with the help of Lebanese migrants. Among them the Syrian-Lebanese Hospital and the Monte Líbano Athletic Club, both in São Paulo. Former Brazilian President Lula was hospitalized in Hospital Sírio-Libanês, when he received treatment for laryngeal cancer. Syrian-Lebanese clubs are also found in Belo Horizonte; one sports club is located near the UFMG, the Federal University.

Detail of the Syrian-Lebanese sports club
in Belo Horizonte

São Paulo hosts a large Arab community, and many small businesses and restaurants bear Arab names. Also Curitiba and Foz do Iguaçu have large Arab Communities. It is not uncommon to notice women in Foz do Iguaçu, who wear traditional Arab clothes, including the niqab. Many stores and restaurants in these cities in the state of Paraná bear Arab names. You may easily find Arab food, such as durum or kebab. You will notice many locals with an Arab appearance. They have mixed with Brazilians, with other migrant communities. A nice example of integration, as it appears.

Another Lebanese club in Belo Horizonte

I was in Curitiba for ten hours, when I was on the way to Foz do Iguaçu. Two Brazilian friends, Verónica and Roseane, have guided me through the city. Curitiba is a cold city, according to Brazilian standards. Cold when talking about the climate, and cold when considering the mentality of the people, that strongly resembles the European mentality. When I was walking around in the center of Curitiba, I did not notice this coldness. I was visiting a local market in the center, where bright yellow canvas of the market stands created a sharp contrast with the wintry blue sky. I noticed two light green towers between the yellow and the blue. Two minarets of a mosque. We approached the mosque and peered inside. There were not many visitors inside. The man at the entrance noticed our curiosity and invited us to enter the mosque. We had to take off our shoes, and Roseane received a kerchief to cover her hair. Verónica waited outside. She already had visited the mosque before. I informed if it was allowed to take pictures. He did not object.

Wearing a kerchief was obligatory

We entered the mosque respectfully; there was an atmosphere of serene silence. For me it was the first time to enter such an Islamic god house. Almost everything inside was painted in pastel green. A warm carpet that felt comfortable under our feet. There were interesting tapestries. Roseane and I were slowly walking around, absorbing the green environment and the tapestries. I made some photographs. We left the mosque ten minutes later; we thanked the man, and put on the shoes again. For me it was worth visiting this interesting mosque. 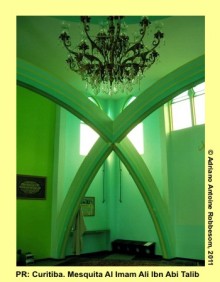 Delegation from The Lebanon

At the end of May 2006, a Lebanese member of the Parliament, Dr. Ismail Sukriyad, responsible for Health Affairs, was on a working visit in Curitiba. He mentioned the strong mutual ties between Beirut and Curitiba, and suggested that they should become sister cities. 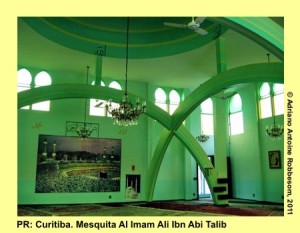 Sources:
Brazil Has More Lebanese than Lebanon
A Lebanon That Speaks Portuguese and Eats Brazil’s Feijoada
Arabs Love Brazil. They Are 7% of the Country.
Brasileiros agonizaram horas sob escombros
Once again: Brazilians Are Not Hispanic